So… I finally did it! I bought my first US made handgun. And this one is the latest version of a true classic: The Ruger Mark IV …

Since the shooting range owner charges €10 for each new hole in the cover below the paper targets, I was looking for a rimfire pistol. My Glock 17 is not the first choice when it comes to precision shooting on 25m (27 yards).

In 2016 Ruger introduced the new Mark IV. I was fascinated by the reports and videos. So I did some readings on the Ruger Pistol Mark series:

The main difference between the Mark III and the Mark IV is the way of disassemble. If you are familiar with the Ruger MK 3 you know that there are millions of posts on different online gun platforms and videos on how to disassemble and clean the gun. So you haven’t seen such a video? Feel free to watch on:

With the Ruger Mark IV this difficult task is gone! You can easily dissassemble it in less than 5 seconds!

If you are interested in guns and target shooting you have to learn one thing: Most of the time you will wait a long time for your desired gun!

And this was what happend to me: The gun was introduced in the US in September 2016 and was available on the first online shops around end 2016 beginning 2017. I ordered my gun in April 2017.
The pistol was/is a top seller in the US. That means: America First and German Customers have to wait.
But when it is shipped you have some delivery time to the importer. He has to register the gun with the goverment agencies, send it to a goverment testing facility and then send it to the local dealer. In my case the importer is the local dealer. He estimated, due to long waiting times at the testing facility that he can hand over my gun in July 2017.
But as always: When something can go wrong it will go wrong. In my case: Product Recall !
That means: The weapon will be sent back to the USA, where the affected parts will be reworked. Then everything will be shipped back to the german importer and back to the goverment testing facility…
Well, I was finally able to pick up my gun at the end of November 2017 at the local dealers shop.

Back home I had to ignore my wife and dog for about 2 hours. I had to inspect, touch and admire the gun:
Moving the bolt back and forth, testing the trigger, click, clack, put the mag in and out again. Dissamble, Resamble, pinched my finger… All good.
First impression: This gun is awesome!
But now I had to wait. We cant shoot guns on our property in Germany. My visit at the gun range was scheduled for sunday… Or maybe… test it on the cat from next door? ………. – Nah! Stay strong and wait!

First visit at the gun range:

After arriving at the gun range I had to shoot a lot 🙂
The Ruger Mark IV fits my hand perfectly, but the trigger is kinda strange. It needs an update or it needs to be replaced.
The target picture was alright and I could not complain. As you guess: I am not the best shooter. So you should read other articles about the accuracy of the gun.

During the visit at the gun range I had some technichal issues with the gun, that are now discussed on online platforms: feeding problems.
During 50 shots I had 1 malfunction on average. On different online platforms you will read about approx. 10% malfunctions.
We will see how that will develop in the future. As this is my first .22lr pistol I can only rely on experiance from others. They told me that you need to break in such a gun with about 1000 shots. Also the kind of ammunition makes a big difference. Ok – I have 5 different brands of .22lr at home and they all produce malfunctions…

However, cleaning afterwards was fast and simple. As mentioned before you can easily dissassemble the gun. All the dirty parts/areas can easily be accessed this way.

What are the next steps?:

After breaking it in with approx. 1000 to 1500 bullets I want to try some different ammunition.
Following the first rounds I am thinking about changing the trigger. Maybe I can change it on my own. We will see…
An additional red dot would be awesome. But first it needs to run smooth and reliable. 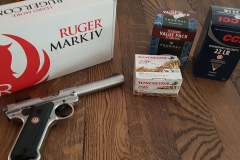 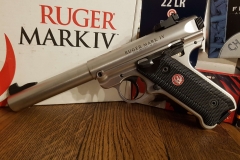 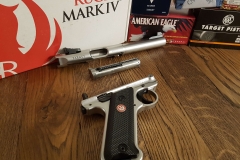 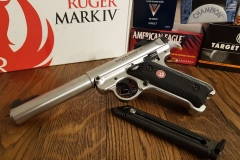 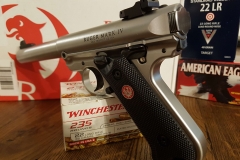 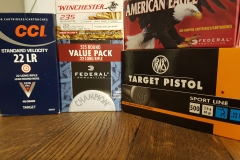 2018 is the year, where the “EU-Gunban” has to be adopted into national law.
So please support the GRA and Firearms United:
https://german-rifle-association.de/